2 edition of An evaluation of the Production Recruiting Incentive Model vs quota-based recruiting using Monte Carlo simulation found in the catalog. 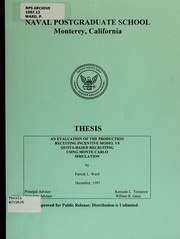 In recent years, the United States Navy has actively sought new and better ways of making the recruiting process more efficient. Towards this end, the Production Recruiting Incentive Model (PRIME) was developed at the Naval Postgraduate School. This thesis evaluates recruiter production and incentives in the Navy"s quota-based recruiting system against the PRIME system using Monte Carlo simulation Techniques in two spreadsheet models. The first spreadsheet model compares three distinct quota scenarios against PRIME in three separate recruiting market conditions. The second model evaluates the two systems as the variance of the recruiting market changes. This study produces two main findings. First, in all cases; PRIME proves to be a superior recruiting system than its quota-based rival. Second, the simulation quantitatively illustrates the inherent flaws of quota based recruiting. The author recommends that the Navy replace the current quota-based system with the more efficient PRIME system.